You might know why you got running shoes and started running. But why do humans run in general and why is it so popular? This posts provides some answers.

So you’re an endurance runner. But do you really know why? I’m sure you had at least one specific reason why you started running in the first place.

But what is it that drives dozens of millions of runners to just stick to it for decades and put in hundreds of hours of hard training in a world that strives to ever more comfort?

Maybe you asked yourself this question many times or maybe your non-running friends wanted to know why the hell you go out for a run several days a week.

There are obvious reasons, mostly health related, to run regularly. But still there’s something special about running. Kids do it automatically shortly after they start walking. And adults that started running for better fitness don’t just stop after success sets in. There’s a special kind of addiction about long distance running and one might wonder if there’s any reason for this.

After running for over a decade and reading many books about the topic by both runners and scientists, I’d like to give you an overview and some background on why I think humans are just runners and why our sport gets more popular year after year.

History of the Human Body

I think our will to run has a lot to do with the human body and the multi-million year-long story of how it evolved. So let me start this journey of finding an answer to the title question in a short recap of human evolution.

As it is common knowledge nowadays, chimps are the closest genetically relative to modern humans. They shared a last common ancestor, and in a long-lasting process of several million years, human like ape genuses started to appear that showed one major difference from the tree-climbing apes: Bipedalism, the ability to move on two legs. 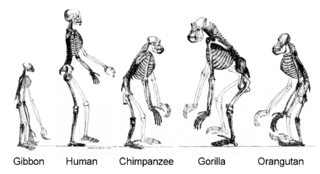 One famous sentence in biology says: “Nothing in Biology makes sense except in the light of evolution”. So there had to be a reason why it was an advantage to move on two feet compared to climbing in trees. And of course it was all about gathering calories.

In modern societies it seems that life is to a large extend all about making money. The life-saving currency up to about 12,000 years ago was just calories. Every minute of the life of early humans was dedicated to gathering enough calories for survival for oneself, and for as many offspring as possible.

For millions of years before modern human beings learned agriculture, the diet mainly consistent of mostly fruits that was gathered in the dense forest that many genuses of human-like apes called home.

But then climate changed. It got dryer and temperatures started to be more volatile. As a result the rain forests in central Africa lost density and the habitat changed more to savannas and became more open.

To gather enough fruits and other foods like nuts, roots and vegetables, longer distances had to be covered. And that’s where bipeds have a couple of advantages compared to knuckle-walking chimps and gorillas.

Bipedal locomotion in modern humans is about four times more energy-efficient than locomotion of chimps. Early hominids didn’t walk and run that efficient just then, but even a slight caloric advantage when gathering food decided between life and death.

Also freeing up arms and hands was a benefit to be able to reach for fruits and carry them for a long distance. Also being upright increased the field of view and decreased the surface area of sunlight exposure which helped to stay cool in the more and more open habitats of the savannas and woodlands.

So it was a major step in human evolution and a massive advantage and the most important characteristic of the human body to walk upright on two legs. But this is walking. What about running?

DON’T BE A JOGGER, BE A MARATHONER!
GET STARTED WITH 30+ FREE TRAINING PLANS AND MY ESSENTIAL ENDURANCE RUNNING TRAINING GUIDE

Remember that nothing in Biology makes sense expect in the light of evolution? There are a bunch of features in the human anatomy that are not needed for just walking but make running long distances possible in the first place.

These features emerged in the last two million years of human evolution and are mainly seen already in homo erectus, the predecessor of modern humans, and there are two possibilities. These features just randomly developed as a byproduct of the ability to walk, or running was beneficial in the habitats early humans lived in.

So let’s have a look at some of these features and how they might have helped early humans to gather new types of energy rich foods and thus survive and create more offspring than other apes that lived side-to-side to humans in the African savannas.

Locomotion in general and running especially heats the body up increasing the risk of overheating. Researches showed that big cat predators like leopards don’t stop after a short sprint because of lack of energy. They stop because their core temperature raises to a certain level and damage may occur.

Cooling in quadrupeds mostly relies on panting, so breathing in cooler air at a fast rate. When running, the amount of breaths is limited. Because of organ movement while on the run, they only can breath once on each step.

The major cooling feature in humans is much different. We mostly cool through sweating. Millions of sweat glands make sure your skin stays wet. When sweat evaporates it cools your skin, the underlying blood vessels and therefore your entire body.

As already mentioned, the upright gait reduces the surface area of sun exposure in the midday sun. So the ability to cool efficiently was a major advantage when hunting animals around noon when stronger and faster animals like lions lie in the shade and wait until it’s cooler.

Yes that’s right. Compared to apes our gluteal muscles are huge. In fact the gluteus maximus is the biggest muscle in the human body. But gorillas for example can also walk with much smaller gluteal muscles compared to body size.

The evolution of the human foot showed some major changes over time. In knuckle-walking apes, hands and feet are basically the same and are used to grab and hold on to trees.

Early hominids showed mostly flat feet. But that changed around two million years ago. You might know someone with flat feet and they’ll tell you that walking isn’t a problem.

But running is different. The “second version” foot of modern humans feature an arch that provides stability and combined with the many muscles and tendons a great amount of damping.

The achilles tendon attached to your heel is the longest in mammals. It’s used to take up energy when your foot touches on the ground and release that energy when you take the next step.

All the body characteristics described above emerged from hundred of thousands of generations and helped early humans walk and especially run for long distances. This was crucial to not only collect enough fruit and other planned-based food but also to hunt down animals and thus access another calorie-rich energy supply.

It lies deep within our genetic heritage that we are just runners. We were running on two legs for presumably up to two million years. So to me it comes at no surprise that long distance running is today the most popular mass sport.

Ok so our bodies are well adapted to running through millions of years of evolution and body features emerged that support running for hours. But what about the mental side?

I hope you already experienced a good runner’s high. That awesome state of euphoria and the feeling that you could just run forever.

As you can feel awesome in all of sports when you experience a flow-like state, the runner’s high is somewhat different and in this extend unique in sports.

We now know that this phenomenon is not only caused by endorphins but rather by endocannabinoids that are released into your blood when you work out for at least 45 minutes at an intensity of around 80-85% of your maximum heart rate.

But why is that? And again the reason might be found in the hunter-gatherer life style that was common up until around 12,000 years ago.

Imagine you are hunting with some members of your tribe. You are on the way for some hours switching between running and walking. And then you get tired, your muscles are sore and you feel some pain.

So you stop, lay down in the shade and hope someone else gathers enough food for you. Or your brain has a mechanism in place that keeps you going, that makes you love what you do and thus increase chances your hunt is a success.

The runner’s high might have been another selective advantage that guaranteed individuals that their hunt for food is successful on enough days in order to survive.

Today we know that this high feeling on long distance runs is highly addictive. Another leftover from hunter-gatherer days that hasn’t been lost in the 600 generations since we started to rely more and more on agriculture.

Running in the 21st Century

I’ve been talking a lot about the story and the evolution of the human body. And I’m doing this for a reason. In modern, industrialized countries we take our bodies and health for granted. We think running is just another sport and another opportunity to feel good.

But as it isn’t hard to tell I believe the reason we love running so much goes much deeper and can be found, at least in part, in the past millions years and what our bodies are well adapted for.

But life today is different and there might be other reasons that contribute to the still growing amount of people who go running on a regular basis.

For sure the modern ideal of what is beautiful has something to do with it. Usually lean and fit people are considered beautiful, often making a lot of people feel (too) bad about their own figure.

Whether these ideals are good or bad I leave up to you. But to achieve it, running is one of the best things one can do.

Another interesting study I’ve recently read about is related to the influence of social media. The study showed that encouraging others and sharing own success increases the amount of workouts and distance people cover.

And last but not least competition presumably plays also an important role. Being better than the next guy is also something that is deep in our nature. And mass sports is just a popular way to compete against one another.

If you interested in reading more about why we run, I recommend you the following books:

DON'T BE A JOGGER, BE A MARATHONER!
GET STARTED WITH 30+ FREE TRAINING PLANS AND MY ESSENTIAL ENDURANCE RUNNING TRAINING GUIDE